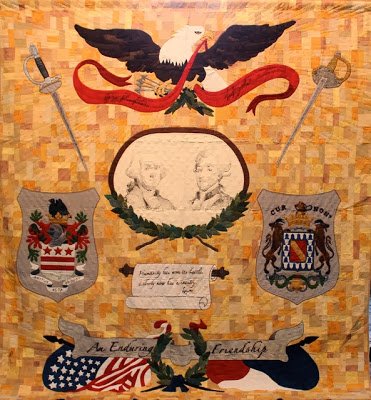 LAFAYETTE AND WASHINGTON: AN ENDURING FRIENDSHIP

Begun in 2005, the quilt Lafayette and Washington: An Enduring Friendship, was completed in 2007 for the City of Lafayette’s Commemoration of the 250th anniversary of the birth of the Marquis de Lafayette.

A large appliqué across the top of the quilt features an American Bald Eagle, a strong American symbol of liberty and freedom. In the eagle’s talons are arrows and olive branches. The head of the eagle faces right toward the olive branches indicative of seeking peaceful solutions rather than war. The banner bears the names of Lafayette and Washington, symbolic of the enduring friendship based on their mutual desire for individual freedom and liberty, and a belief that all men are created equal.

On the left of the quilt are images of Washington’s battle sword, his portrait, his family Coat of Arms, and the American flag.

On the right are images of Lafayette’s Presentation sword, his portrait, his family Coat of Arms, and the French flag. Lafayette’s sword was a gift from the U. S. Congress in appreciation for his contribution and service to the American cause for independence. Of note, the hilt of the sword is a liberty cap, a symbol of individual liberty that has been used since Egyptian times.

The medallion with inked portraits of Lafayette and Washington is framed with a laurel wreath, symbolic of victory.

"Humanity has won its battle. Liberty now has a country”, a quotation from the address given by Lafayette at the British surrender at Yorktown, ending the American War for Independence, is embroidered on the scroll in the center.

The bottom of the quilt features the American and French flags and a banner bearing the words “An Enduring Friendship”. It represents the friendship of Lafayette and Washington as well as that of America and France. Without French assistance, both militarily and financially, the young country could not have won its independence from Great Britain.

The quilt features a pieced tonal background that adds a richness and depth to the finished quilt. Quilting stitches radiating from the eagle are symbolic of the dawn of liberty and freedom. Stitched into the quilting are numerous fleurs de lis as well as thirteen stars representing the thirteen original colonies.

The liberty theme is further carried out in the backing fabric which features a grid printed with the words “ALL MEN ARE CREATED EQUAL” with small shields and tri-corn hats.

Designed and created by members of the Quilters Guild Acadienne, the background is machine pieced and features hand appliqué, hand embroidery and fabric inking and is entirely hand quilted.

Next Quilt - Acadian Odyssey
The General and the Marquis


George Washington and the Marquis de Lafayette met August 5, 1777, after the Continental Congress appointed the Frenchman as a volunteer Major General in the Continental Army. Nineteen years old and one of the richest men in France, Lafayette was assigned to serve on Washington’s staff. He left his home to fight against the British in the American Revolution. George Washington had no natural children and was immediately impressed by the young Lafayette’s high spirited enthusiasm and dedication to the American cause. Equally impressed after his first encounter, Lafayette said of Washington, “Although he was surrounded by officers and citizens, it was impossible to mistake for a moment his majestic figure and deportment; nor was he less distinguished by the noble affability of his manner.” The two men bonded immediately; an enduring friendship developed.


Silas Deane, who headed a colonial delegation in Paris to secure French officers to aid in the American cause, recruited Lafayette, not for his military skills, but rather for his connections to the court of Louis XVI. Defying the wishes of his king and his father-in-law, Lafayette purchased his own ship, named it Victoire, and set sail for America.
Lafayette served without pay and actually paid the equivalent of $200,000 dollars of his own money for the salaries, uniforms, and other expenses of his staff, officers, and junior officers. Lafayette first saw action in 1777 at the Battle of Brandywine. The young Marquis fought fearlessly under the command of Major General John Sullivan and later under Major General Nathaniel Greene in New Jersey. He also led 2,200 troops at the Battle of Barren Hill and continued to distinguish himself at the Battle of Monmouth Courthouse.
In 1779, Lafayette returned to France to ease relationships between America and France. Wearing his Continental Army uniform in Paris, he convinced the king to send the French fleet north from the Caribbean to fight against the British.
In Virginia, in 1781, Lafayette conducted hit-and-run guerilla attacks against the British forces led by Benedict Arnold and later against the army of Cornwallis. He played a crucial role in the siege of Yorktown and was present at the British surrender that ended the war and brought independence to the colonies.
Lafayette and Washington remained close friends after the war. Lafayette’s only son was named George Washington Lafayette. In 1789, after the start of the French Revolution, Lafayette, fearing for the safety of his children, sent them to America where they remained at Mount Vernon under the care of Washington until the end of the war. Lafayette, as Commander of the French National Guard, led the storming of the Bastille. He later sent the key to the west portal of the Bastille to Washington. The key hangs, to this day, in the hallway of Mount Vernon.
Lafayette and Washington corresponded regularly until the death of Washington in 1799. When the Marquis died in 1834, much of the United States mourned. President Andrew Jackson ordered the French Marquis receive the same funeral honors as George Washington in 1799.